Love wine? Then let’s plan your itinerary to include Germany Wine Festivals. 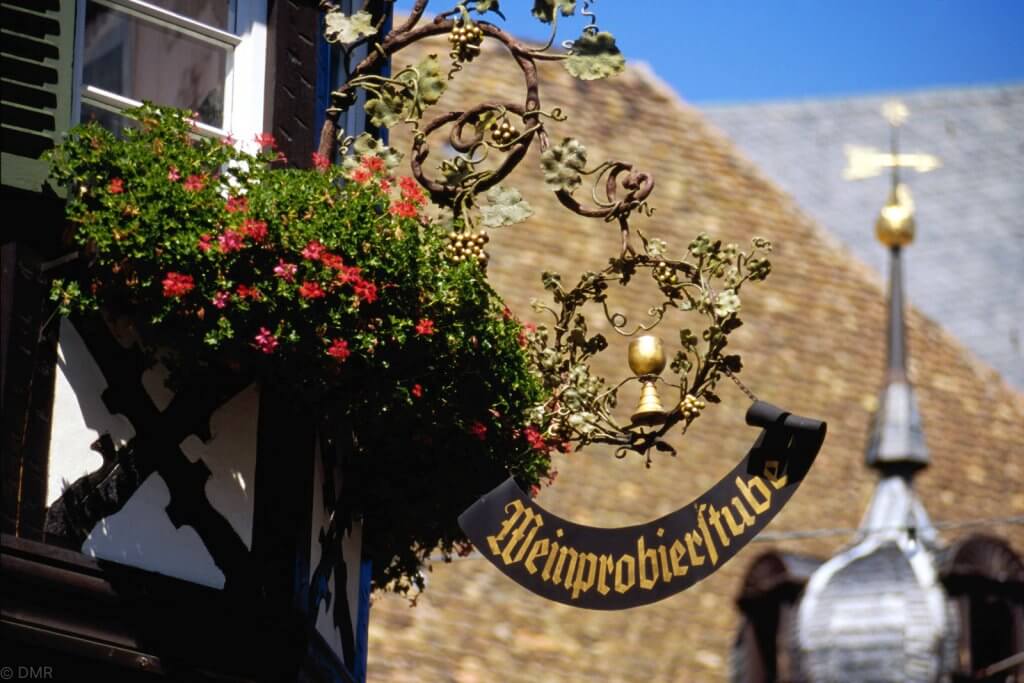 The first drink to come to mind when I mention Germany probably isn’t wine, but the country is filled with vineyards and has a long history of wine production. The oldest winery in Germany is the Vereinigte Hospitien in Trier, and the wine cellar can be traced as far back as 330 AD during the Roman Empire. A wine tour through Germany is always a good idea, but planning your trip around these German wine festivals is a great idea. 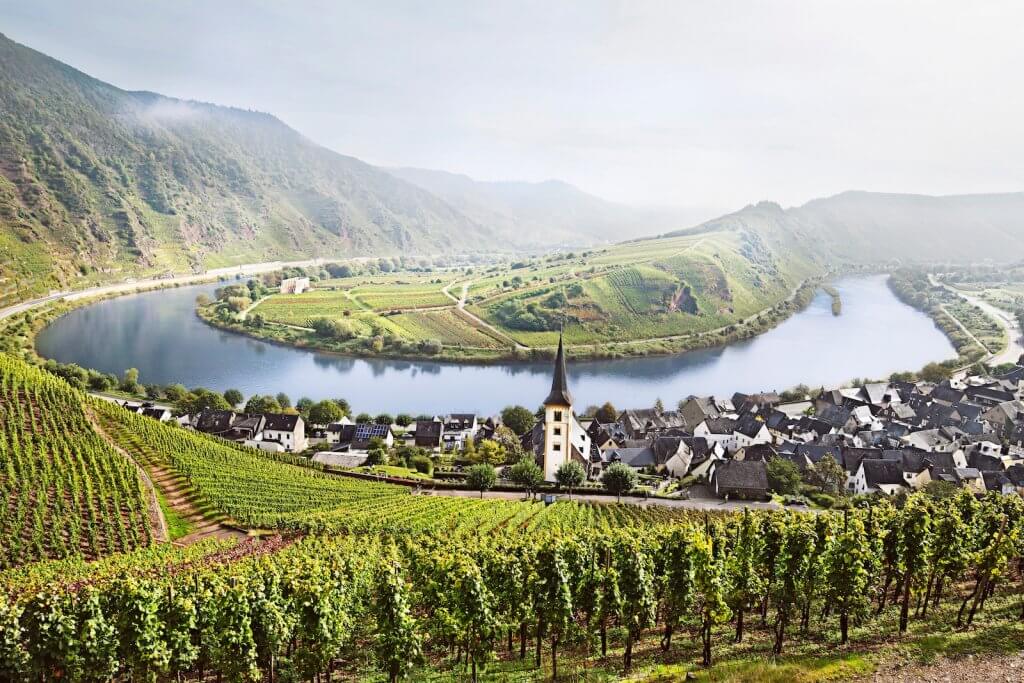 To start planning your wine itinerary, look to the western areas of Germany along the Rhine and Moselle rivers. Starting near Cologne and moving south along the Rhine toward Switzerland, these wine-growing regions are particularly productive. The world-renowned German Rieslings are produced here, but you’ll find plenty of other wine varieties in Germany with red pinot noir, sparkling Sekt, and even rosé.

For many years, I thought Riesling was a sweet wine, but oh how wrong I was. While there are sweet Reisling wines, like the high sugar concentration of Eiswein — when the grapes are left to freeze on the vine and then pressed while they’re frozen — German wines also deliver some bone dry Rieslings. If you’re not a fan of sweet wines (we aren’t either), then look for the word “Trocken” on the bottle, or find the ABV (alcohol by volume) and look for wines at 12% or higher. 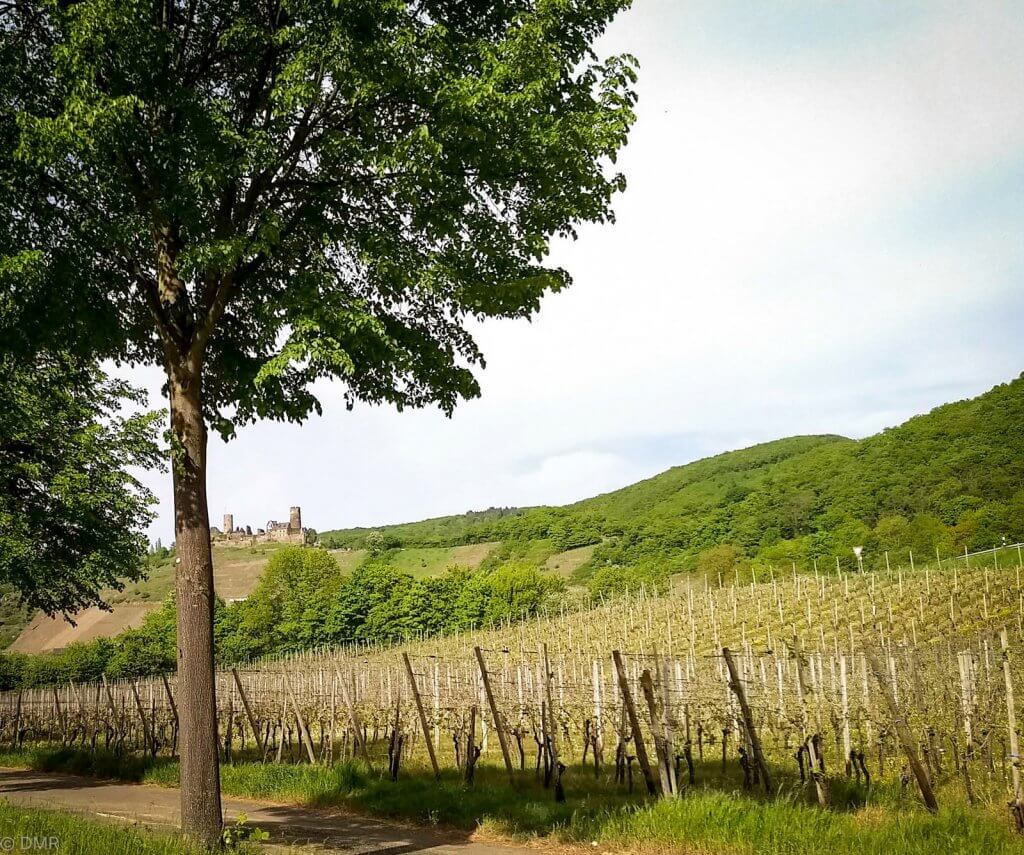 Germany even has its own wine road, the Deutsche Weinstraße, in the Palatinate region that winds 53 miles through villages, vineyards, and wineries. You can visit this area outside of the festival season and still enjoy a taste of German wines. Remember that drinking and driving laws are very strict, so if you’re on a road trip through Germany, have a designated driver.
Each year on the last Sunday in August, the route is closed to auto traffic for German Wine Route Day and is only open to foot traffic and cyclists to enjoy the wine bars and fairs along the way. 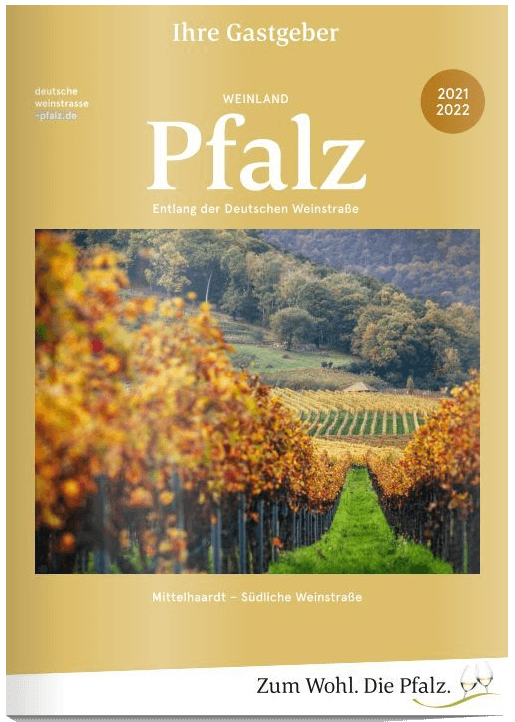 ‘Federweisser’ or ‘Neuwein’ is new wine is made from grapes recently harvested and is just beginning the fermentation process. The flavor is very fruity, a little fizzy, low in alcohol, and you have to drink it there. There’s no way to transport it because the fermentation process is active, and bottles would explode. Enjoy a glass of ‘Neuwein’ with a traditional onion tart called Zwiebelkuchen, or with my favorite, flammkuchen – a flatbread with caramelized onions and speck.

Most wine festivals kick up around the time of the grape harvest, so if you want to join a bunch of wine celebrations, you’ll need to schedule your Germany trip at the end of August into early September. There’s nothing wrong with planning an entire trip around a specific interest, and if that interest is wine, let me know. I might go with you. 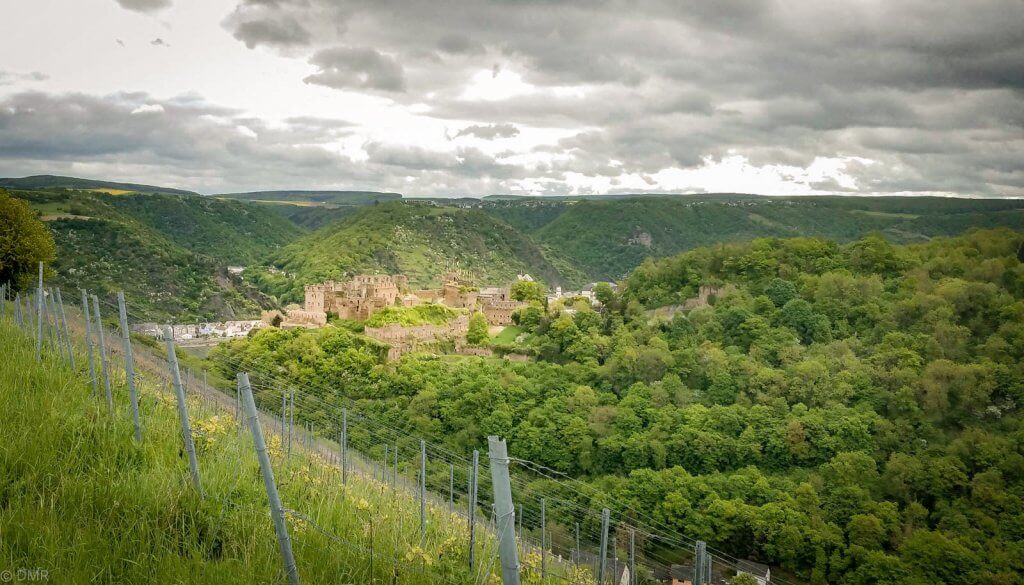 If wine is your thing, before you decide on your travel dates, take a look at some of the wine festivals happening in Germany, and plan your itinerary to visit a wine festival or two.

Mainzer Weinmarkt
Mainz, Germany
End of August into the beginning of September 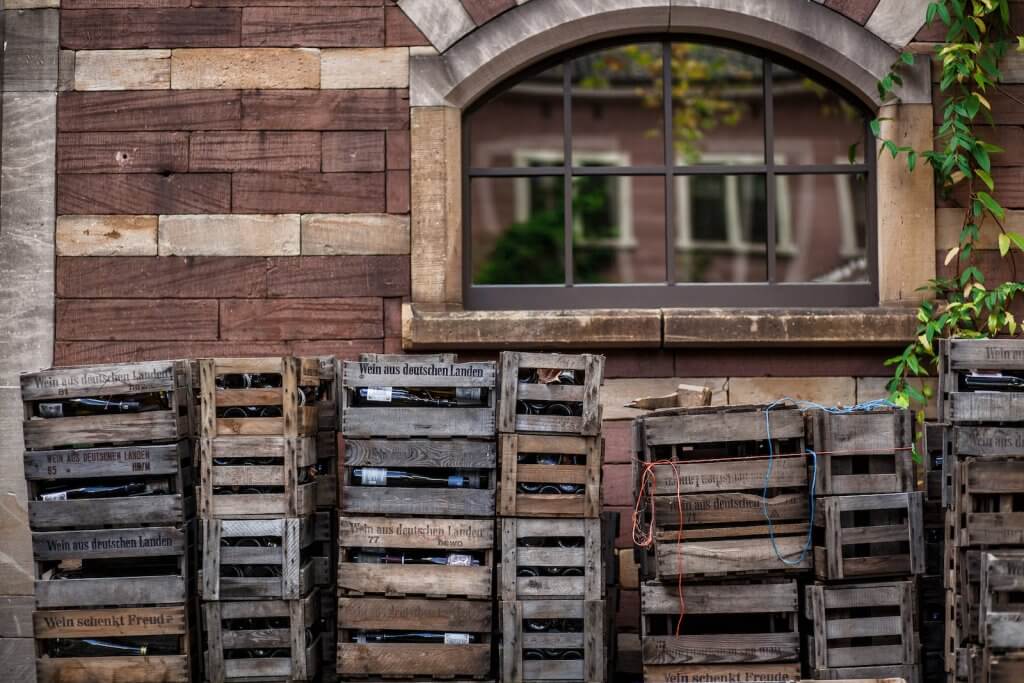 Oechsle Fest
Pforzheim, Germany
End of August into the beginning of September

Stuttgarter Weindorf
Stuttgart, Germany
End of August into the beginning of September 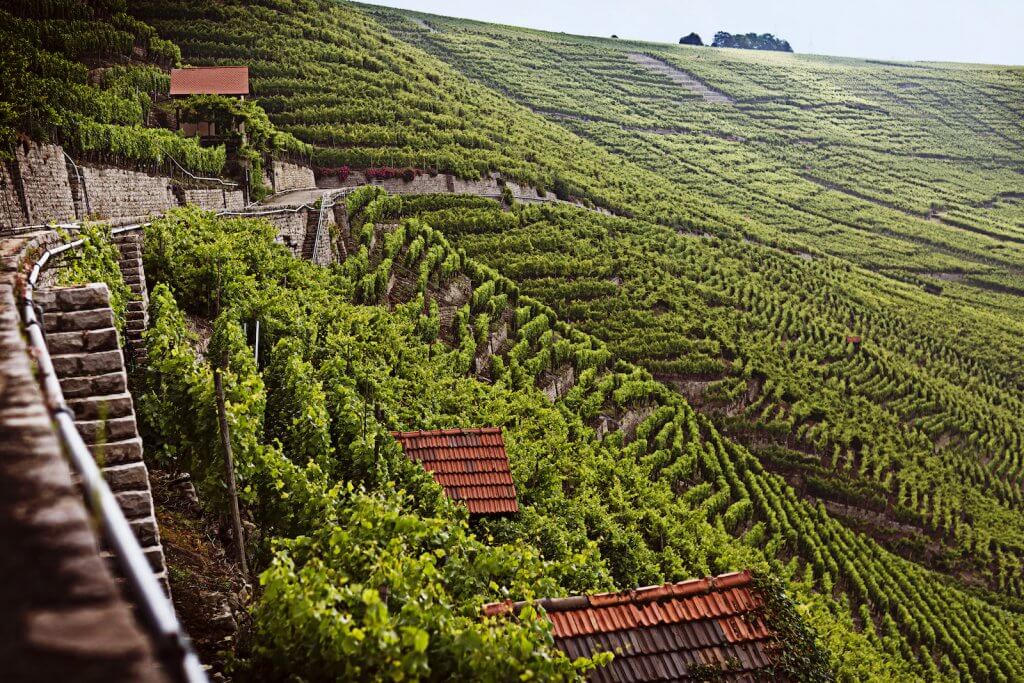 Dürkheimer Wurstmarkt
Bad Dürkheim, Germany
Mid-September
*The world’s largest wine festival with over 600,000 visitors per year. The wine festival is held annually on the second and third weekend of September in Bad Dürkheim. The first Wurstmarkt – under a different name – was held in the year 1417. 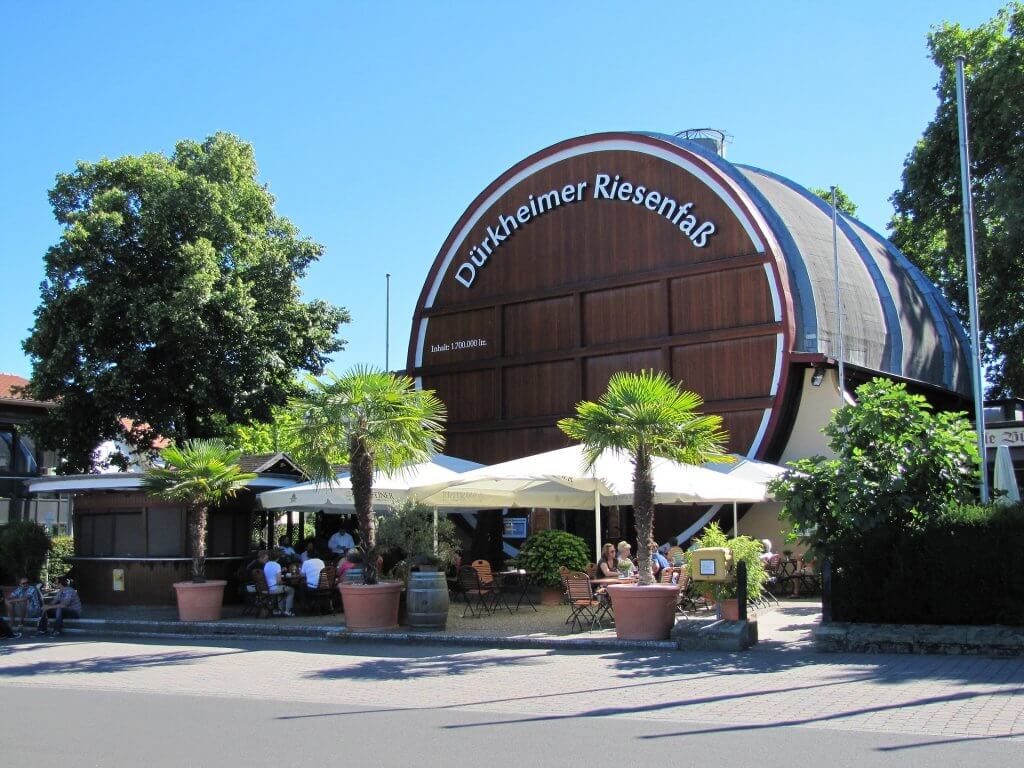 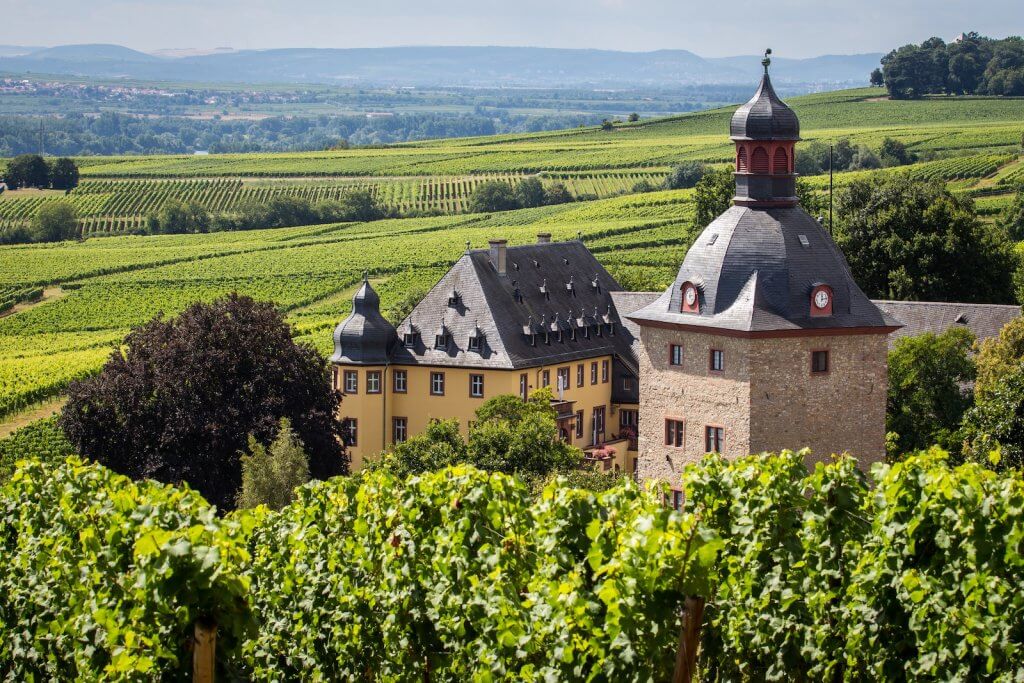 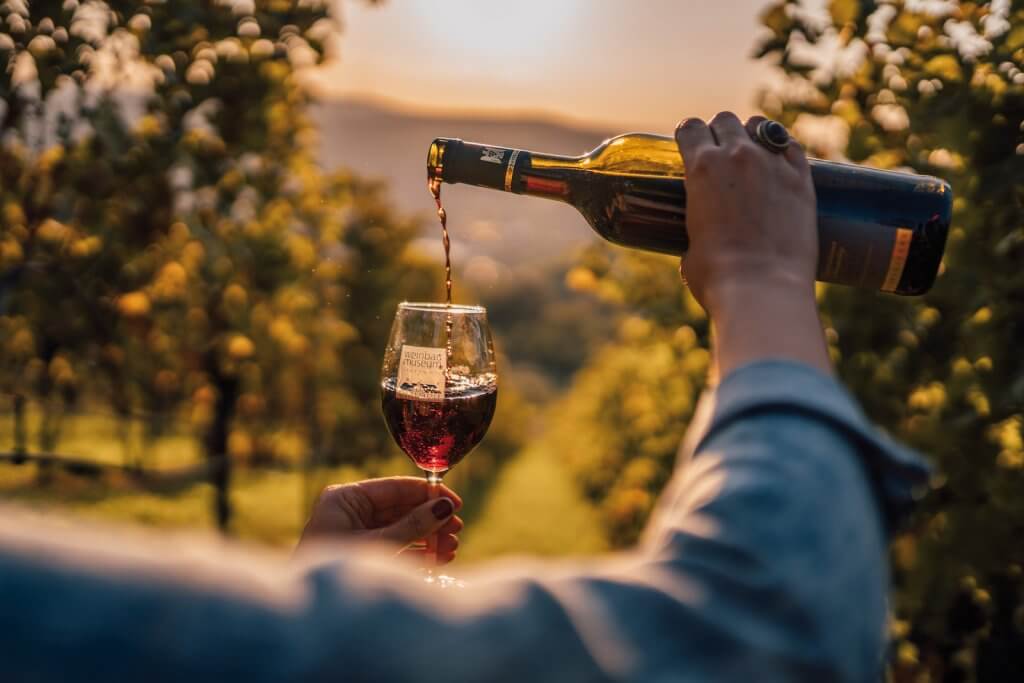 Did I forget your favorite Germany wine festival? Send me a note and I’ll add it to the list.

Ready to book your Germany trip? Reach out and let’s get started!

Sign up for the free email newsletter to get more travel tips.

Save the Germany Wine Festival Map 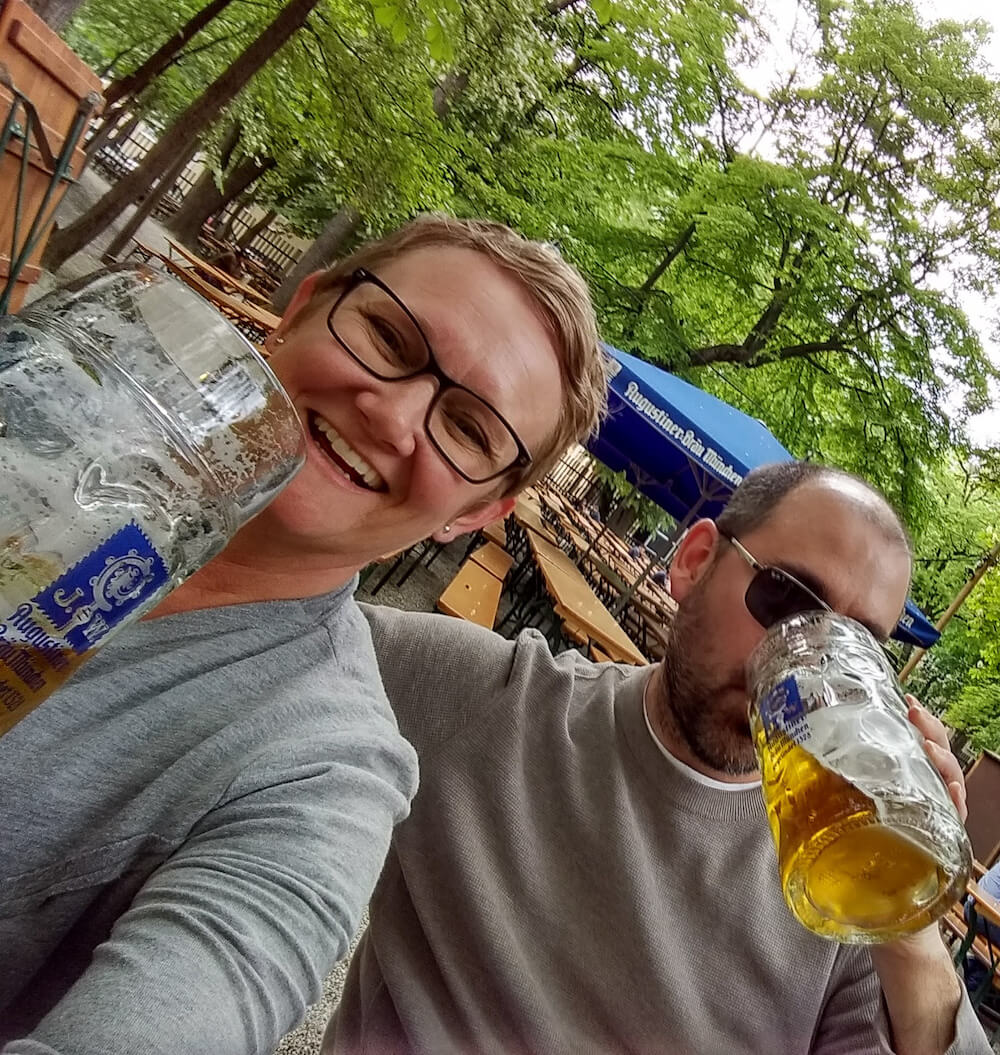 Hi, I'm Michelle! I'm a travel industry pro with numerous certifications and specializations in European Travel with a focus on independent travel. I've got you covered with some travel advice and insider tips, and I'm also available to help with any specific questions you have. I'm here to help you with your independent European travel.

Get to know Michelle!

My opinions are my own, but DMR Travel may receive commissions when you purchase through some of the recommended service providers or endorsed products.

We use cookies on our website to give you the most relevant experience by remembering your preferences and repeat visits. By clicking “Accept”, you consent to the use of ALL the cookies.
.
Cookie SettingsAccept
Manage consent

This website uses cookies to improve your experience while you navigate through the website. Out of these, the cookies that are categorized as necessary are stored on your browser as they are essential for the working of basic functionalities of the website. We also use third-party cookies that help us analyze and understand how you use this website. These cookies will be stored in your browser only with your consent. You also have the option to opt-out of these cookies. But opting out of some of these cookies may affect your browsing experience.
Necessary Always Enabled
Necessary cookies are absolutely essential for the website to function properly. These cookies ensure basic functionalities and security features of the website, anonymously.
Functional
Functional cookies help to perform certain functionalities like sharing the content of the website on social media platforms, collect feedbacks, and other third-party features.
Performance
Performance cookies are used to understand and analyze the key performance indexes of the website which helps in delivering a better user experience for the visitors.
Analytics
Analytical cookies are used to understand how visitors interact with the website. These cookies help provide information on metrics the number of visitors, bounce rate, traffic source, etc.
Advertisement
Advertisement cookies are used to provide visitors with relevant ads and marketing campaigns. These cookies track visitors across websites and collect information to provide customized ads.
Others
Other uncategorized cookies are those that are being analyzed and have not been classified into a category as yet.
SAVE & ACCEPT