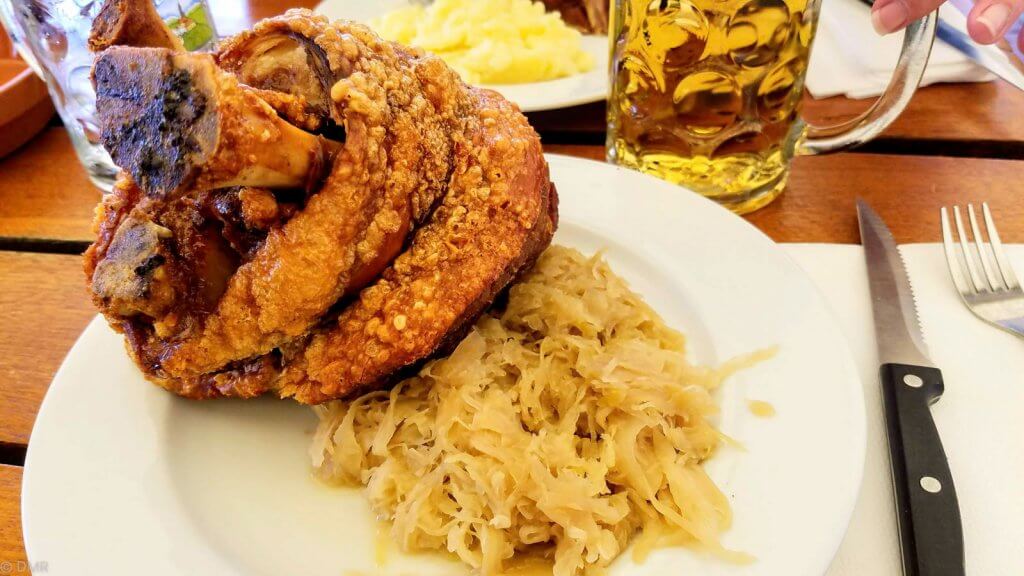 Eating and Drinking in Bavaria, Germany

Germany is our favorite European country to visit. It might have something to do with the beer, or that there’s pork available for every meal.

Most folks think of sausage when they think of German food, and every region has its own specialty sausage. Still, traditional German cuisine is varied according to the different regions of the country. For example, in the northern areas, you’ll find more fish on the menu since there’s easy access to the North Sea. In Bavaria, though, meals are a bit heavier and meat-centric. Neighboring Austria and the Czech Republic share similar cuisine with Bavaria, and pork and potatoes are the stars on most menus.

Modern Germany now has an international influence in its cuisine, and you can find plenty of Italian pizza, Asian options like sushi, and US imports with McDonald’s and KFC. But the most popular international food comes from Turkey, and that’s the Doner Kebab. Introduced to Germany in the 1970s by Turkish immigrants, the Doner Kebab, similar to a Greek gyro, has become the most popular fast food in the country. We never leave Germany without having eaten a few doner kebabs.

In larger cities, you can find just about any food you crave — international specialties, or strictly vegetarian, or Michelin-star — but this post is about traditional dishes you should eat when you’re traveling in Bavaria.

Of course, you should eat schnitzel when you’re in Germany. Who doesn’t love a piece of pork (sometimes veal) pounded thin, breaded, and then fried? It’s damn delicious! But please don’t have it every meal simply because it’s familiar. I know it’s tasty, but branch out a bit. 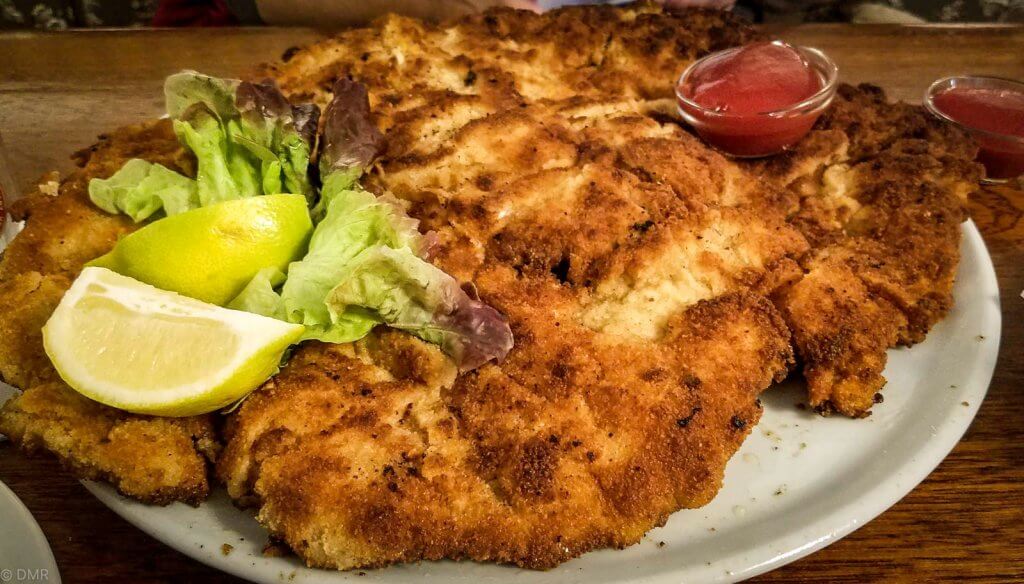 Yep, if you’re in Germany, there will be kraut. I don’t know why it works so well with pork, but it does. It’s like the two were made to go together. You’ll find sauerkraut and red kraut (Blaukraut), with caraway and without, sometimes with apples, but no matter the variation, you can generally count on it to come with your meal. 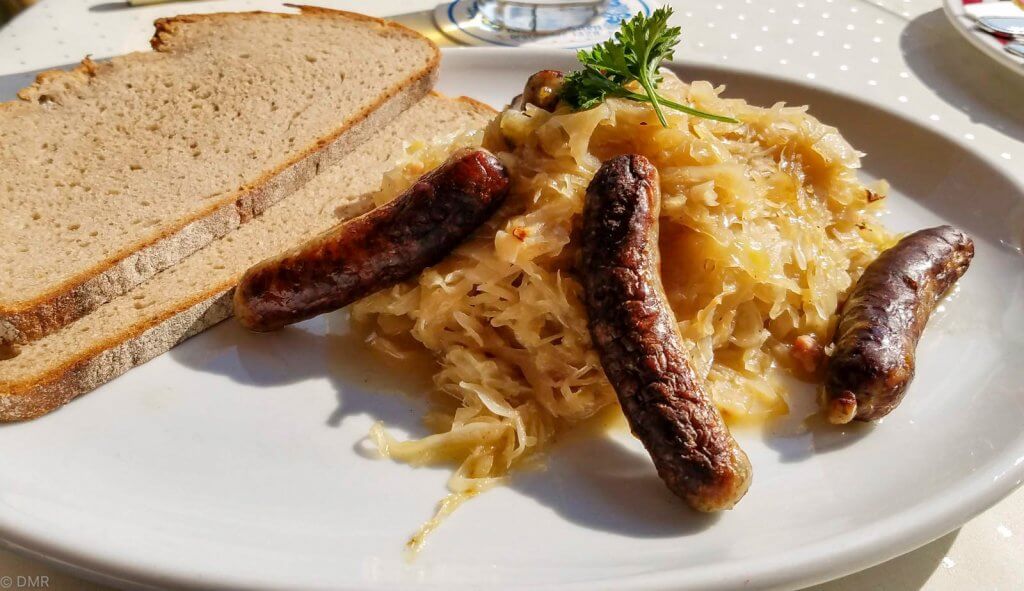 Along with sauerkraut and potatoes, you’ll find spätzle served with many dishes. This little noodle is perfect for sopping up pork fat and gravy and sauces. Or, find it on its own with melted cheese as “Käsespätzle”, which is kind-of a German version of our mac-and-cheese. You might have to look at the kid’s menu to find it, but give it a try when you aren’t hungry enough for a heavy pork-laden meal. (I say that, but I once had an order with more speck (bacon) than cheese.)

This is a sausage that most folks know, and backyard grills in the US have seen many a brat, but yes, go ahead and try it in Germany. Every region has its own variety of sausage – try them all, and you’ll find a favorite. 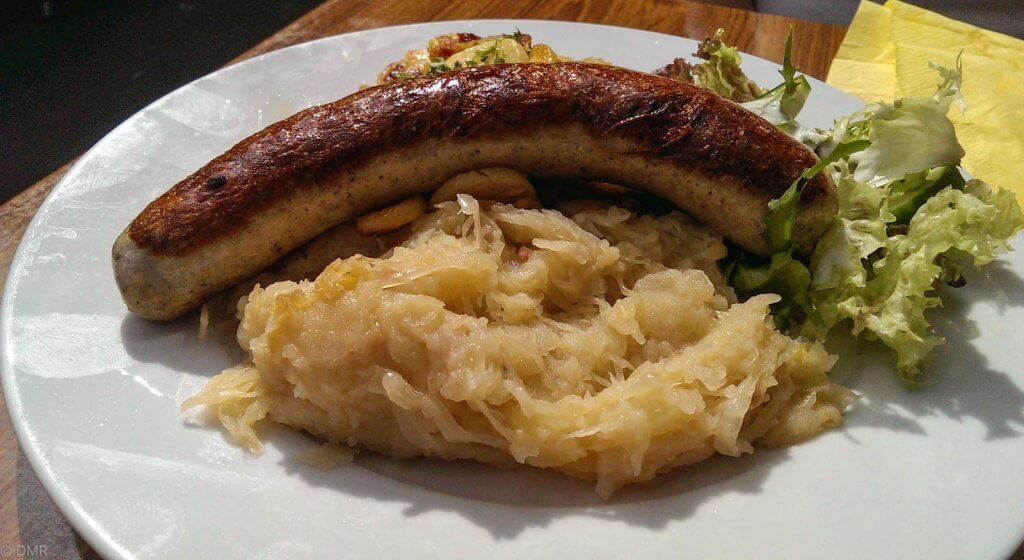 The pretzel. It’s perfect with mustard and a great way to soak up liters of beer. If you plan on drinking large amounts of beer, get a pretzel. You’ll thank me. 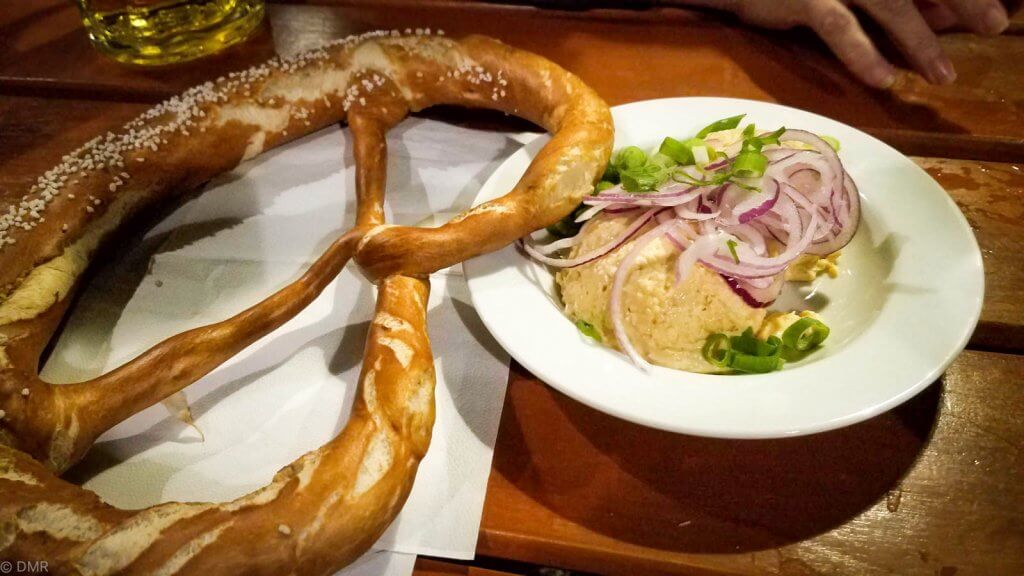 Some German Food That May Not Be Familiar

This is beer cheese. A fatty, salty, creamy, oniony cheese spread that works beautifully with pretzels. You did get that pretzel, right? 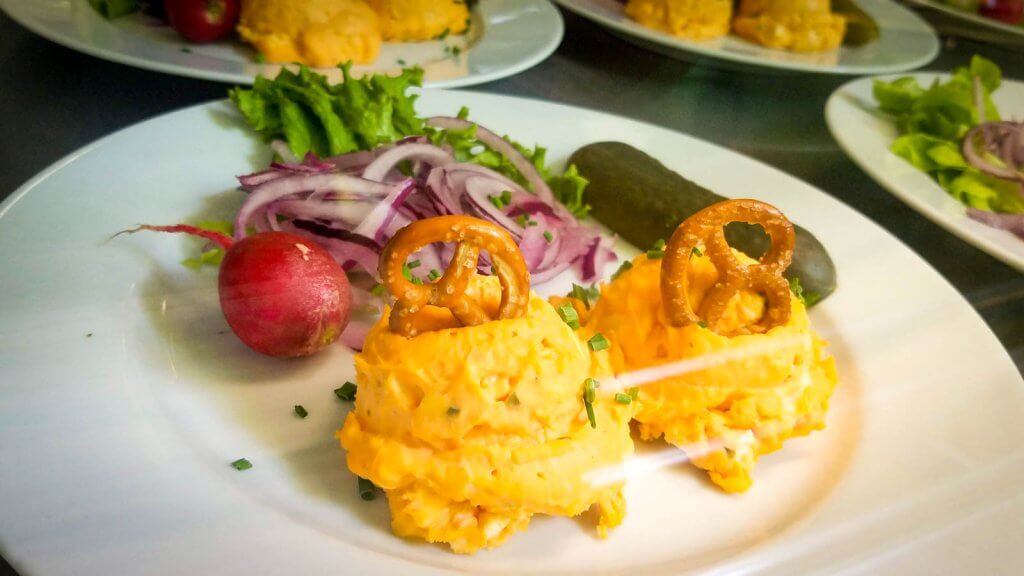 If I use the English word for this, you’ll likely tell me to go f**k myself. But — are you ready? — it’s headcheese. I know most Americans aren’t fans, but I’m not sure how many folks have actually eaten it. Get it as a snack just to say you tried it. I thought I would hate it, but I love it, and we’ve started making it at home. Delicious pork, suspended in savory gelatin, served cold, with a pickle or sauerkraut, some onion, and hearty bread… I don’t know why Americans don’t like it more. 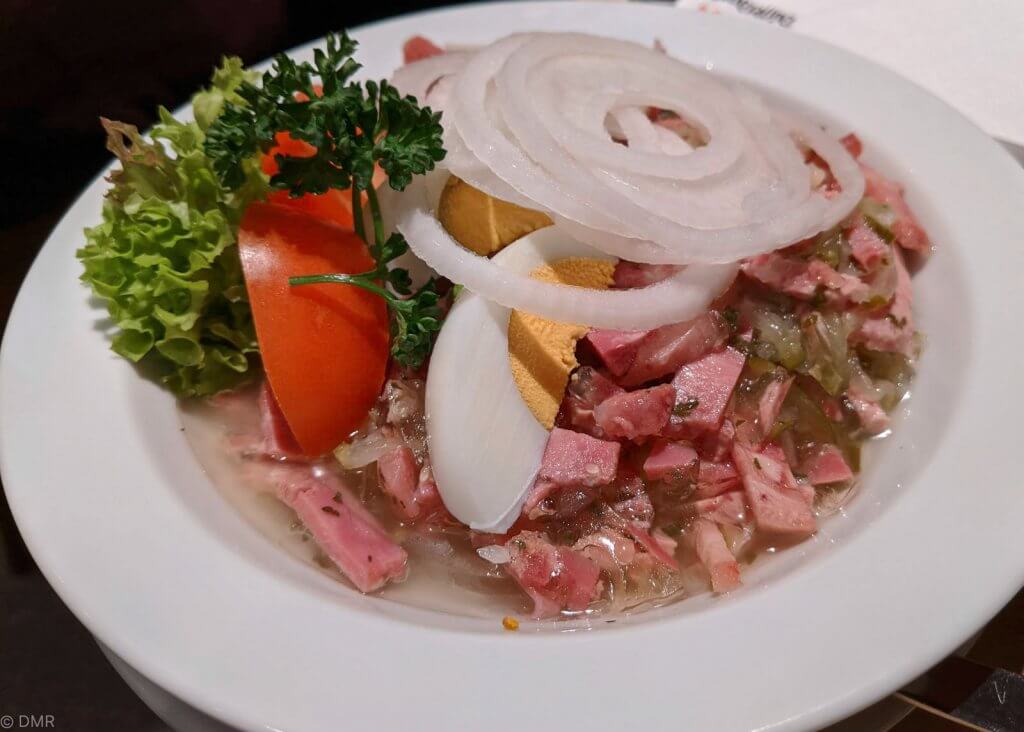 The first time we saw this listed on a menu, we read Wurst = Sausage, Salat = Salad, so “Sausage Salad”. For two unabashed meat eaters, we decided Germany must be the place of our dreams. We ordered it, and, well, yep, it’s exactly what it says it is. It’s basically cold cuts (think bologna and salami) sliced into strips, mixed with pieces of cheese and onion, and tossed with a vinegar dressing. It’s a sandwich you can eat with a fork, but it’s typically served with bread, so I guess that makes it more of an actual sandwich. 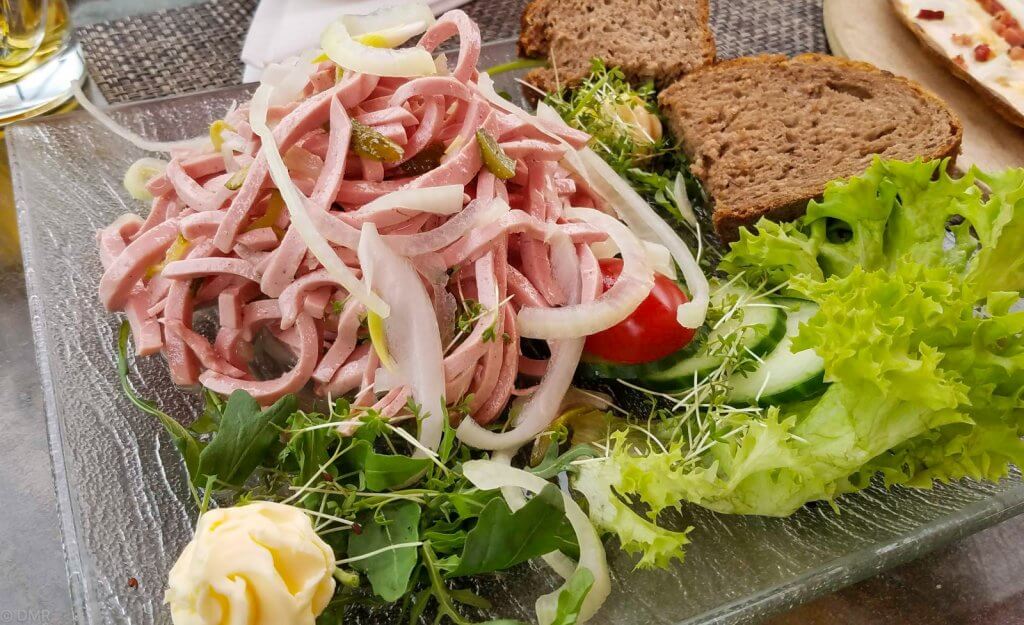 Here’s another one where the direct translation is confusing. Leber = Liver, Käse = cheese. So, liver cheese? No, thanks. But, in fact, it doesn’t have liver or cheese. It’s a meatloaf, with a texture similar to bologna, well seasoned, then baked to form a dark crust. Usually, you eat a warm slice on brötchen (a crusty dinner roll). It’s a wonderful quick snack to eat on the go.

Okay. So this might be a little difficult to imagine, but this is a soup. Flädle is a thin, savory pancake, more like a crepe than our American pancakes, that’s cut into strips, and then the strips are added to a hot broth, usually beef broth. It makes a cold, winter day tolerable. Germans know soup, and every menu will have some manner of soup, so you should try as many as you can. If it’s spring, always go for the Spargelsuppe. And if you’re in Munich, head to the Viktualienmarkt and stop at the Münchner Suppenküche for their daily soups.

This isn’t a picture of Flädlesuppe, but it’s probably the best roasted squash soup I’ve ever eaten. 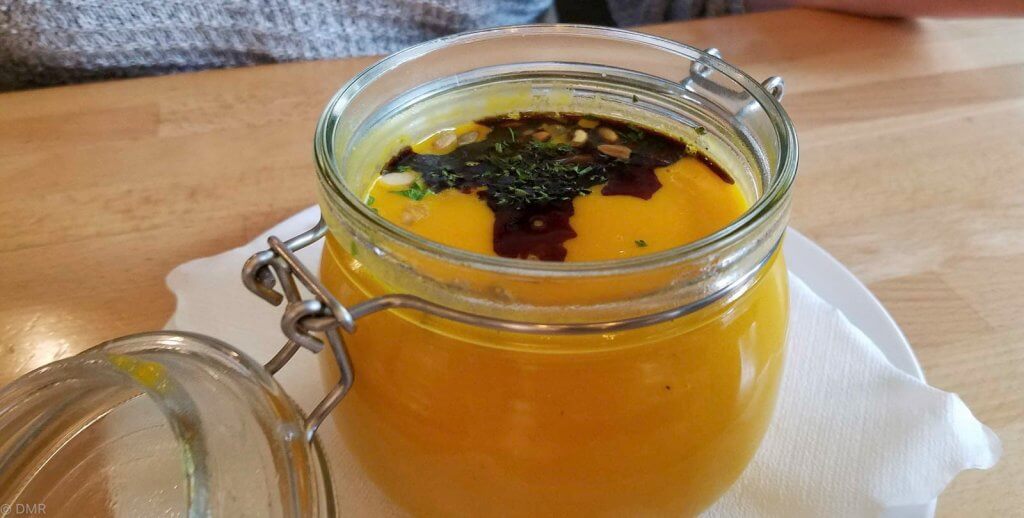 Griebenschmalz is rendered fat, typically pork fat, with pork cracklings added for that extra porky goodness. You use it as a spread on crusty rolls or hearty rye bread. When you order it, you’ll get far more than you think you should. It’s a lot of fat! It should probably come with a cholesterol warning, but the creamy pork fat and crunchy pork crackling bits are a delicious beer companion. 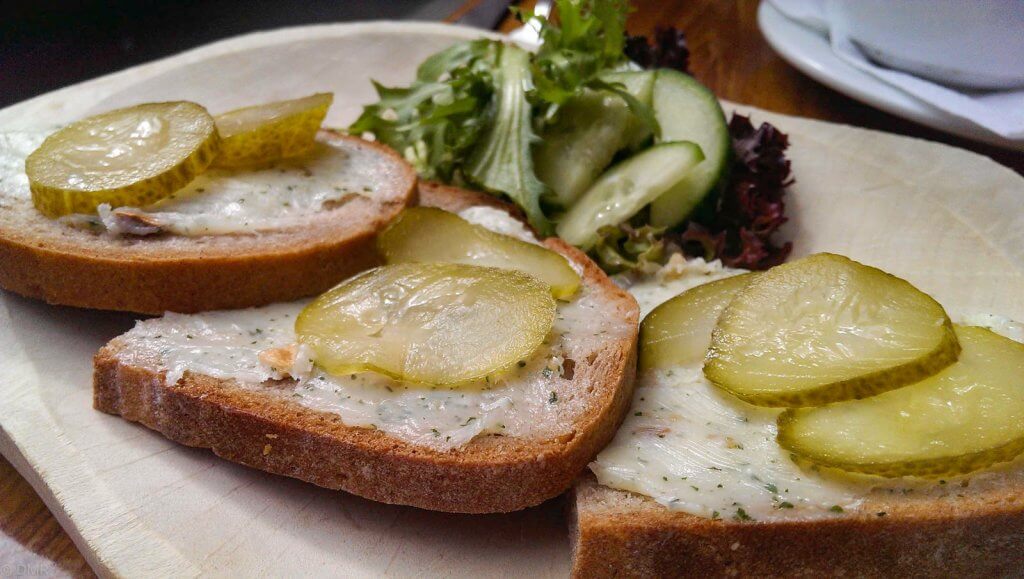 Dumplings – love them or hate them, they will be on most dinner plates. Semmelknödel is a bread dumpling made with stale, day-old bread, milk, eggs, seasoned with onion and parsley, then formed into a ball or flat rounds and cooked in simmering water. Kartoffelknödel is a potato dumpling that uses mashed, cooked potatoes, egg, and a bit of bread crumb to form a ball that’s simmered or steamed to cook. The Kartoffelknödel has a more gummy, chewy texture, and sometimes you’ll find it stuffed with bits of pork.

This is a Bavarian white sausage made with veal and pork and seasoned with onions, parsley, lemon, and spices. Weißwurst has a mild flavor and isn’t cured. It’s made each morning and simmered in water to cook. This is a breakfast or mid-morning snack sausage eaten with sweet mustard. Because there aren’t preservatives, you eat Weißwurst fresh and early in the day, and don’t trust a restaurant selling it after lunchtime. 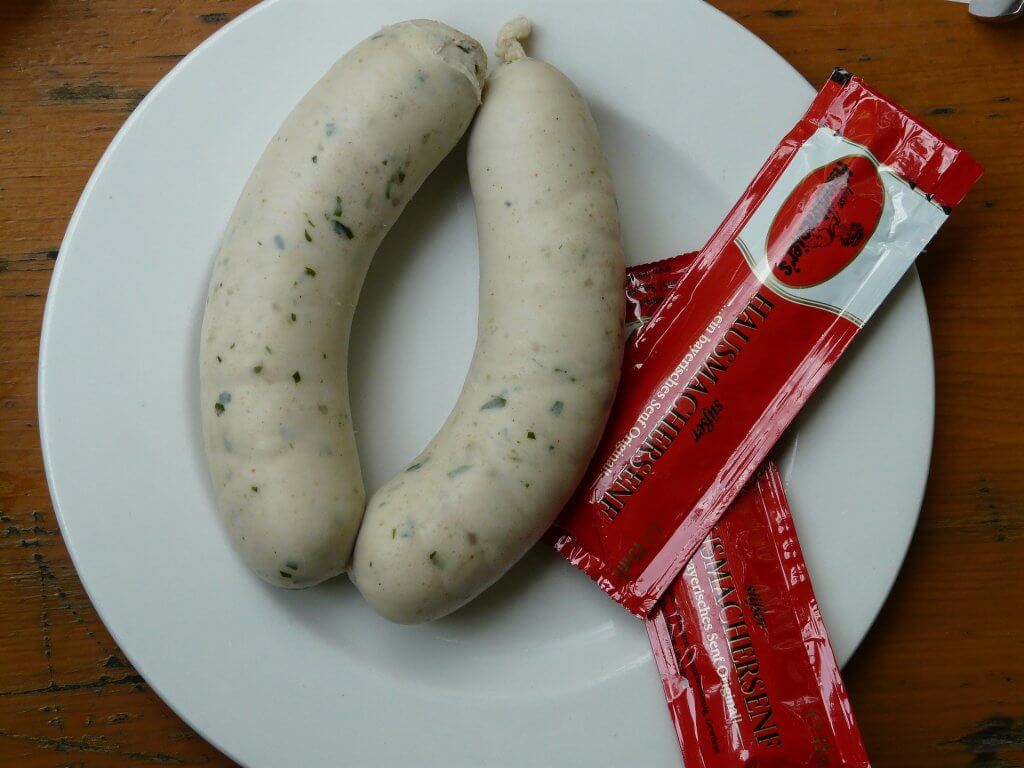 Need a break from all of the pork? You’ll find fish on a stick in Biergartens and festivals. Steckerlfisch is a whole fish, cleaned, seasoned, skewered, and grilled. It’s served wrapped in paper, and you eat it with a squeeze of lemon and some bread. But to be honest, given a choice between fish and pork, I usually go for the pork.

Hax’n: The king of porky awesome! This is a skin-on pork knuckle (ham hock or pork shank) that is slow-roasted to produce tender, unctuous meat inside a crunchy, crispy, crackling outer shell. I’m drooling right now. It’s typically served with a side that could be dumplings or kraut or potatoes. The portion is large, so you might be tempted to share it with your travel partner. Don’t. Make them get their own.
You’ll find a variety in other parts of Germany where the pork is boiled, slightly pickled, and not crispy. But I would much rather have the crunchy, tooth-shattering pork skin.

More than anything else, a simple roast chicken is a German meal you’ll find almost everywhere. You’ll find a roast chicken in small food trailers on back roads, in traditional beer halls, and in Biergartens. And, after the beer, it’s the official food of Oktoberfest. You can never go wrong with a perfectly roasted chicken and a large Maß (or two) of beer. Our typical Munich meal is two liters of beer and a half chicken in a Biergarten. 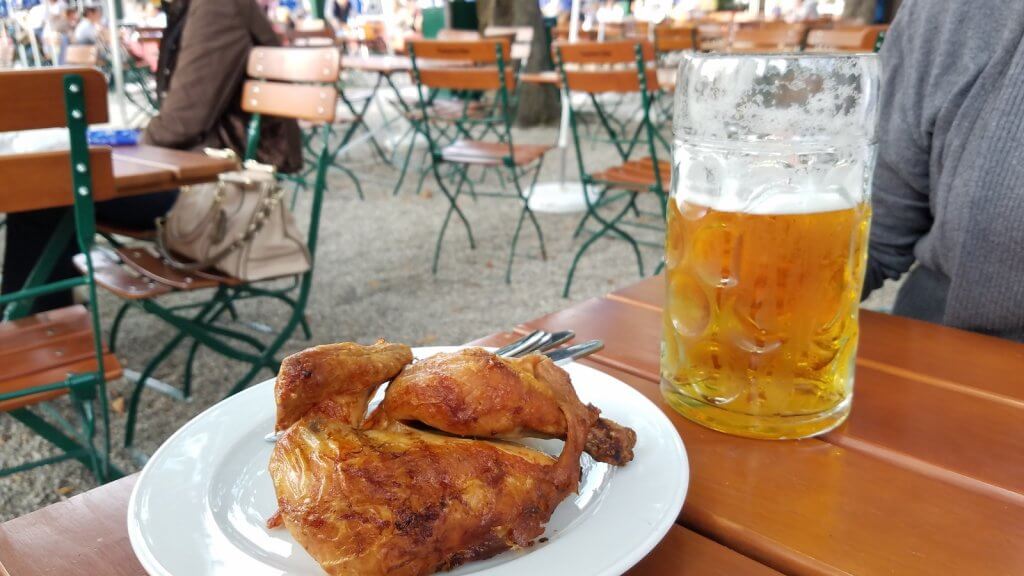 I’m not sure why the Germans go nuts for white asparagus, but from mid-April through mid-June, it’s Spargelzeit (asparagus time), and you’ll find white asparagus everywhere. Markets will be full of it, and every menu will have a Spargel special of some sort. Compared to green asparagus, it’s lighter in flavor, a bit sweeter, and a little more fibrous, making it great to use for soup. One spring trip, for two weeks, I tried all of the Spargelsuppe (asparagus soup) on every menu where we stopped. It became a joke with my travel companions, but since fresh white asparagus is difficult to find in the US, I wanted to eat as much as possible. 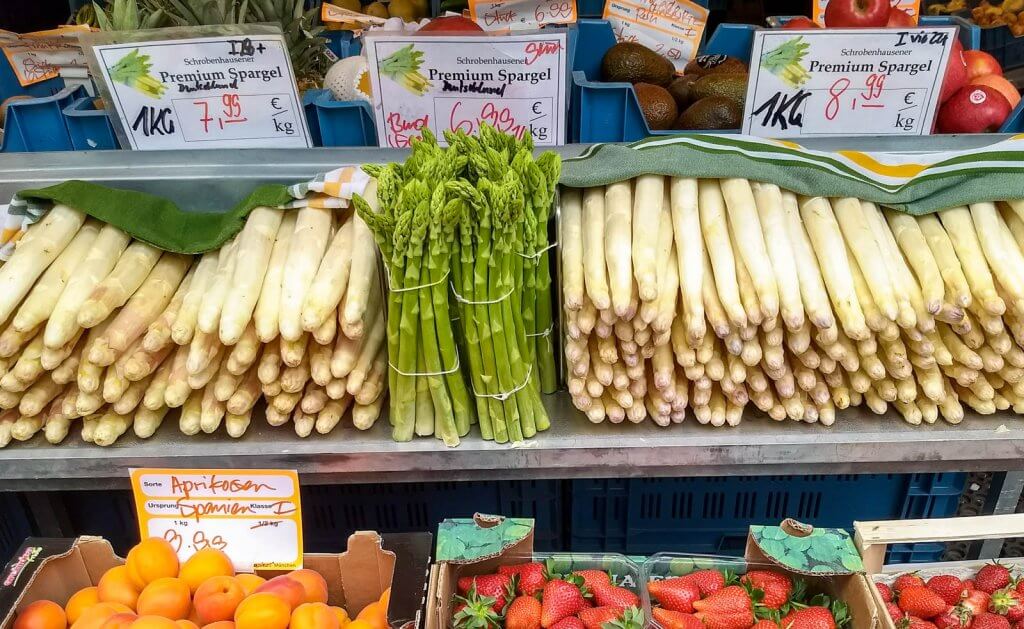 The end of summer means it’s mushroom season. From early September through October, you’ll find fresh mushrooms in every market, and restaurants will have special mushroom menus. Everything from button mushrooms (Champignon) to chanterelles (Pfifferlinger), and cauliflower mushroom (Krauce Glucke) to the prized porcini (Steinpilz) and truffles, will be fresh and available during this season. You’ll find mushroom soups, sauces, and gravies, but my favorite is a mix of fresh mushrooms sauteed quickly and simply in butter. 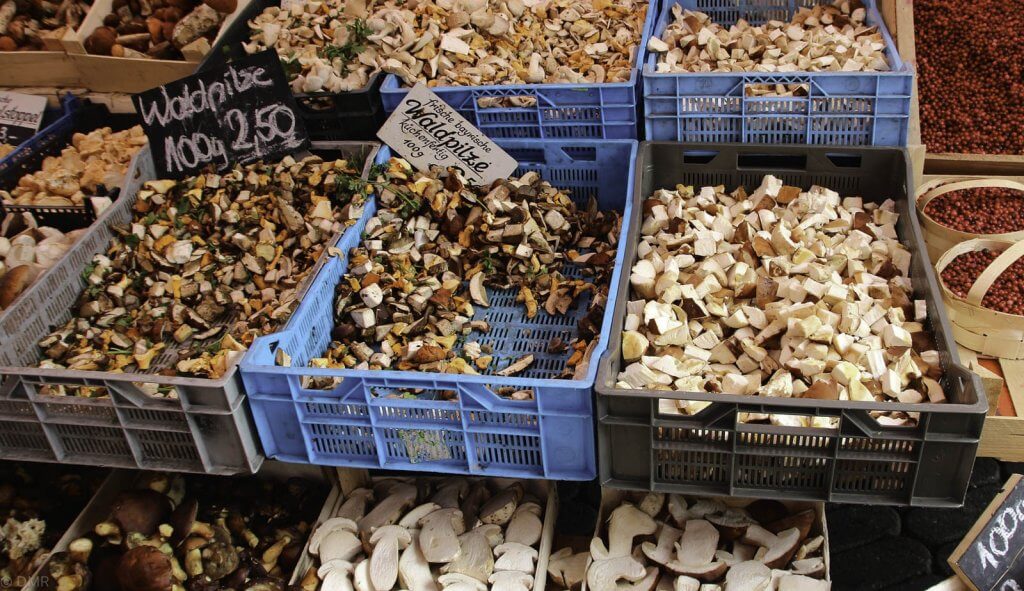 And then, of course, there’s beer. But that’s another conversation. 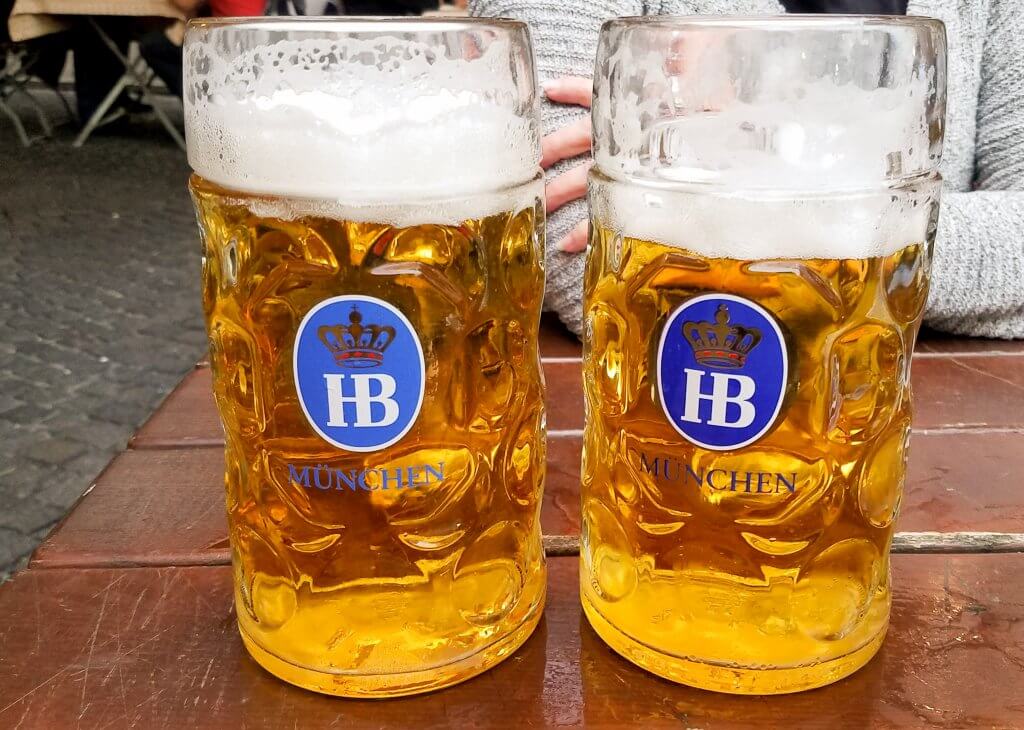 « Italian Marinated Zucchini Recipe | Tips for Dining Out in Germany »

Hi, I'm Michelle! I'm a travel industry pro with numerous certifications and specializations in European Travel with a focus on independent travel. I've got you covered with some travel advice and insider tips, and I'm also available to help with any specific questions you have. I'm here to help you with your independent European travel.

Get to know Michelle!

My opinions are my own, but DMR Travel may receive commissions when you purchase through some of the recommended service providers or endorsed products.

We use cookies on our website to give you the most relevant experience by remembering your preferences and repeat visits. By clicking “Accept”, you consent to the use of ALL the cookies.
.
Cookie SettingsAccept
Manage consent

This website uses cookies to improve your experience while you navigate through the website. Out of these, the cookies that are categorized as necessary are stored on your browser as they are essential for the working of basic functionalities of the website. We also use third-party cookies that help us analyze and understand how you use this website. These cookies will be stored in your browser only with your consent. You also have the option to opt-out of these cookies. But opting out of some of these cookies may affect your browsing experience.
Necessary Always Enabled
Necessary cookies are absolutely essential for the website to function properly. These cookies ensure basic functionalities and security features of the website, anonymously.
Functional
Functional cookies help to perform certain functionalities like sharing the content of the website on social media platforms, collect feedbacks, and other third-party features.
Performance
Performance cookies are used to understand and analyze the key performance indexes of the website which helps in delivering a better user experience for the visitors.
Analytics
Analytical cookies are used to understand how visitors interact with the website. These cookies help provide information on metrics the number of visitors, bounce rate, traffic source, etc.
Advertisement
Advertisement cookies are used to provide visitors with relevant ads and marketing campaigns. These cookies track visitors across websites and collect information to provide customized ads.
Others
Other uncategorized cookies are those that are being analyzed and have not been classified into a category as yet.
SAVE & ACCEPT